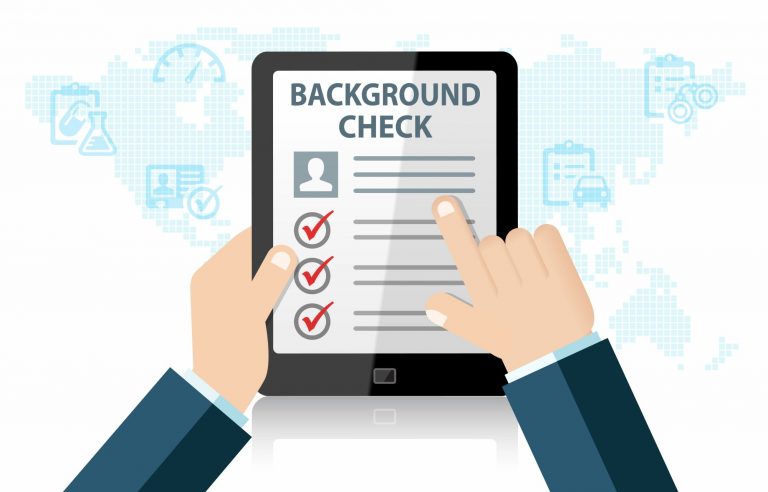 In most but not all cases, a criminal conviction renders you “inadmissible” for permanent residency, meaning that you are ineligible for a green card.

Therefore, whether you are applying for your green card through family or marriage sponsorship, your criminal record may render you inadmissible for permanent resident status, making a green card difficult to obtain.

However difficult, it is not impossible.

There are waiver provisions in U.S. immigration law that might allow you to obtain a green card, even with a criminal record.

In this article, SelfLawyer discusses criminal convictions, waivers under immigration law, and how to obtain a green card with a conviction on your record.

Do I Have to Tell of My Criminal Record in My Green Card Application? 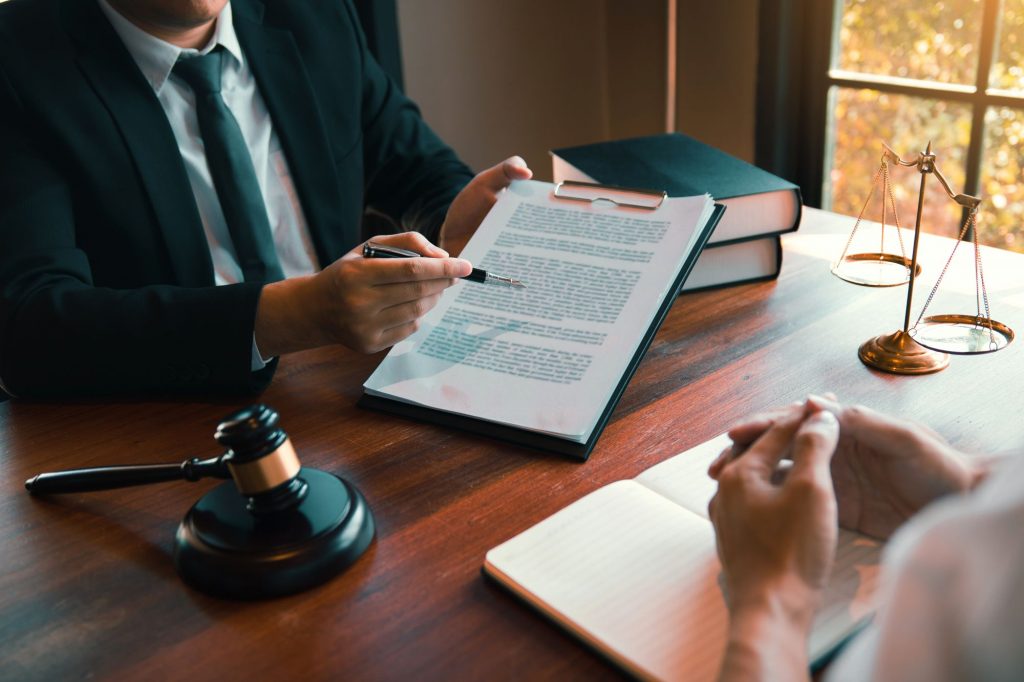 Your immigration application contains an entire section devoted to your criminal record.

It asks you to describe your every interaction with the criminal justice system–not only in the U.S. but in your home country and anywhere else.

United States immigration law requires you to disclose ALL criminal history, even if your record has been sealed, expunged, or otherwise cleared.

If you have been told by a judge, lawyer, or law enforcement officer that you do not have to disclose this information in any other proceeding, you are required to report this criminal history to U.S. immigration officials.

Many people lie and simply state they have no criminal record.

These same people are quickly discovered when the required biometric screening is performed.

During this biometric screening, your photograph and fingerprints are subjected to a criminal background check.

Lying on your immigration application leaves you ineligible for virtually any U.S. immigration benefit in the future.

Even if this lie is discovered years later, your status will be revoked and you will be subject to deportation. This rule also applies after you’ve become a naturalized U.S. citizen.

When asked if you have to tell the United States Citizenship and Immigration Services (USCIS)  of your criminal history, SelfLawyer’s answer is always, “Yes.”

What Constitutes a “Conviction” under Immigration Law?

If you plead guilty or were found guilty by a judge or jury, you are “convicted” of that offense.

For immigration purposes, you also have a “conviction” if you plead guilty (or no contest) in exchange for a sentencing diversion that leaves you with no criminal record.

For example, say you plead guilty in drug court in exchange for entering a treatment program with the promise of no criminal record.

You complete the treatment program and the court expunges (clears/removes) this conviction from your record.

Under immigration law, you still have a criminal conviction because you plead guilty to a criminal offense – regardless of what is on your record.

What Types of Criminal Records Will Prevent Me From Obtaining a Green Card?

Not every type of criminal offense makes you inadmissible.

Under U.S. immigration law, there are only three types of inadmissible offenses:

If you were cited for some type of parking violation, you probably don’t need to list it on your immigration application.

However, if you were ticketed for any type of moving violation (speeding for example), it is probably best to list this offense even if it is unlikely to deny your application.

An “aggravated felony” under immigration law are those crimes specifically listed by the Congress:

For other crimes that Congress has labeled as “aggravated felonies,” please refer to the USCIS website.

That is, you defraud or injure someone with the intent to cause that person harm.

Whether or not you acted with moral turpitude is subjective.

That is nobody really knows what your intent was but you.

The following is a partial list of acts the federal courts have found to involve moral turpitude:

Again, this list is not inclusive of all offenses.

As such, any drug offense can prevent you from obtaining a green card.

The only exception is one conviction for simple possession of 30-grams of less of marijuana for your own personal use.

What If My Conviction is Not in the United States?

If your criminal record stems from outside the United States, immigration law requires that you compare your offense with similar offenses from the U.S. criminal code.

There are two possibilities:

Can I Get a Waiver to Excuse My Criminal Record?

If you are found inadmissible due to your criminal history, U.S. immigration law allows you to apply for a “waiver of inadmissibility.”

To qualify for this waiver, you must establish that you are not a threat and that your ineligibility would result in “extreme hardship” to a U.S. citizen or a green card holding spouse.

Unfortunately, there are some crimes for which waivers are not available.

These include offenses involving murder and torture, conspiracy to commit murder or torture, and all drug offenses except for simple possession of less than 30-grams of marijuana for personal use.

Form I-601 (Waiver of Grounds of Inadmissibility) 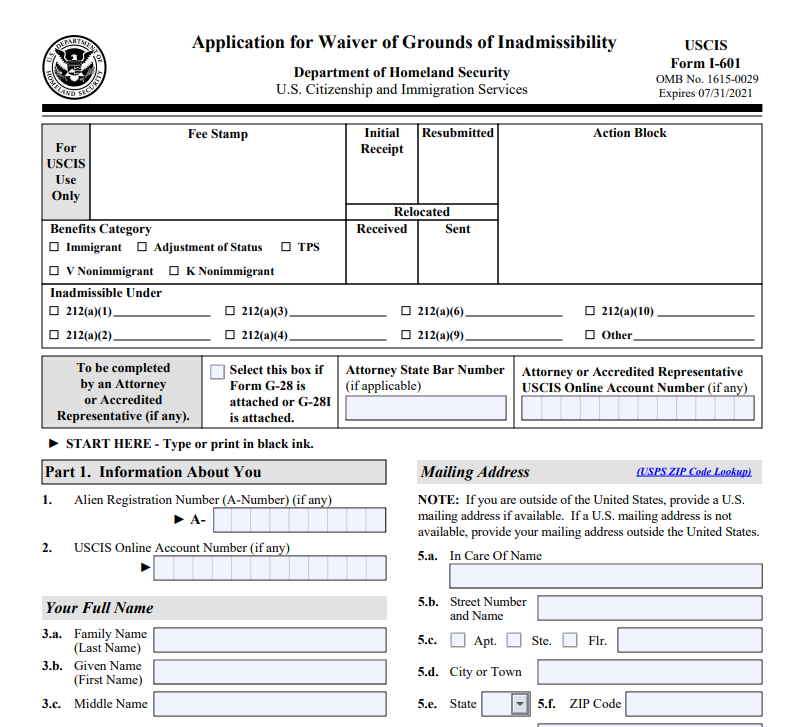 To apply for a waiver of inadmissibility because of a criminal record, you need to file USCIS Form I-601 (Waiver of Grounds for Inadmissibility).

Filing your I-601 application with your immigration application allows USCIS to process both applications at the same time, and may speed along the process.

If you filed your immigration application from another country, you must file Form I-601 at the time of your U.S. Embassy or Consulate interview.

Note: Filing fees and biometric services fees are non-refundable, regardless of any action taken by USCIS on your application.

Establishing Grounds for a Waiver

If your grounds for inadmissibility stems from a criminal conviction; to qualify for a waiver, you must establish:

If your inadmissibility is the result of a violent or dangerous crime, your I-601 application may not be approved unless there exist extraordinary circumstances, possibly involving national security or foreign policy considerations, or if denying your admission would cause exceptional and extremely unusual hardship.

Even if this standard is met, your application may be denied as a matter of discretion.

In this context, extreme hardship goes beyond the normal hardship suffered when family members are separated from one another.

Proving “extreme hardship” is hard but not impossible.

The factors considered in determining extreme hardship can be found in our separate article Extreme Hardship.