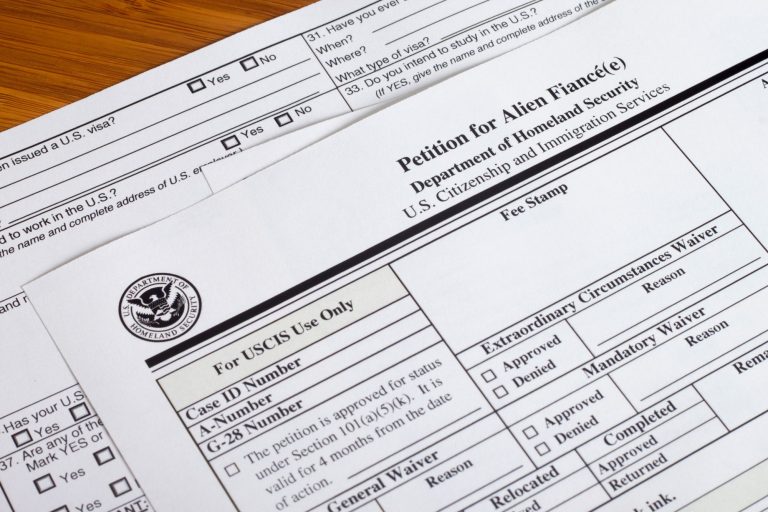 The K-1 nonimmigrant visa is used by fiancés of U.S. citizens seeking to enter the United States for the purpose of marrying and filing for permanent residency through adjustment of status.

The K-2 visa is available to unmarried, minor children (under 21) of the K-1 fiancé(e).

The U.S. citizen is called “Petitioner”, the fiancé(e) is called “Beneficiary”.

The K-1 visa has the following requirements:

Each requirement will be discussed below.

The K-1 visa requires that the couple plan to get married in the U.S. within 90 days of entering on K-1 visa.

It can be difficult to predict when the Department of State will issue the visa, so the couple’s wedding plans should be flexible.

The evidence required to demonstrate this doesn’t need to be precise regarding the exact date and place of the wedding.

For example, a letter of intent from the couple would be sufficient.

Each Member of the Couple Is Legally Able to Marry

Both the petitioner and the beneficiary must be able to demonstrate that any prior marriage has been terminated before submitting a petition.

Also, the marriage must be legal in the jurisdiction where it is to take place (e.g., over the legal age to marry, not an illegally close family relationship, etc.).

We will discuss the examples of documents that can meet this requirement.

It’s a relatively straightforward requirement, but there are some exceptions.

Exceptions are available in the following circumstances:

Advantages and Disadvantages of K-1 Visa

While the K-1 is the only visa specifically intended for fiancé(e)s of U.S. citizens, there are other options available you want to consider.

In general, all options available include:

Some applicants may have the option to enter the United States in another nonimmigrant status (visitor visa, student visa) and then marry and apply for adjustment of status.

However, you need to keep the 90-day rule in mind before getting married in the U.S. in another nonimmigrant status.

However, for those beneficiaries entering on the Visa Waiver Program (ESTA), the only way to avoid the 90-day rule is to overstay it. Consult an immigration attorney if you face this issue.

Another alternative is to marry abroad and either:

The K-3 visa’s original advantage was that Form I-130 processing times were longer compared to Form I-129F processing times, so the beneficiary could enter the United States more quickly.

Moreover, the waiting time for both nonimmigrant and immigrant visa interviews in the U.S. Embassies around the world have significantly increased, up to 12 months.

It might be more beneficial to file Form I-130 and enter the United States with an immigrant visa.

K-1 visas have the advantage of not having to file separate Form I-130s for the children of the K-1 fiancé(e)s, and children between the ages of 18 and 20 can get K-2 visas, whereas petitioning for stepchildren means that the children have to be under the age of 18.

Additionally, as long as the K-2 visa holders are under 21 when they enter the U.S., their age is frozen for purposes of being able to file an adjustment application.

Note that children over the age of 18 do not get this advantage for K-3 visas, and separate Form I-130s must be filed.

The following forms and documents should be submitted with the K-1 visa application to USCIS:

The following forms and documents must be submitted to the National Visa Center after Form I-129F is approved:

A U.S. citizen who has been convicted under §111(7) of the Adam Walsh Act for a “specified offense against a minor” is not eligible to file a K-1 visa petition unless the Department of Homeland Security (DHS) determines that the U.S. citizen poses no risk to the K-1 visa beneficiary.

The following offenses are covered under the law:

A conviction for an offense described in §101(a)(48)(A) would seemingly be covered.

What Happens After K-1 Visa is Issued

However, consular officers may extend it if they decide that the petitioner and the beneficiary continue to intend to marry within 90 days of entering the U.S.

After a K-1 visa is approved, the applicant will receive a sealed envelope with the K-visa petition, medical examination, and supporting documents.

K-2 children following to join will have the same documents in a sealed envelope together with a copy of the approved K-visa petition.

Adjustment of Status in the U.S.

Within 90 days of entering the U.S. on a K-1 visa, the beneficiary must marry the U.S. citizen petitioner.

The adjustment of status application (Form I-485) must be based on marriage to the K-1 petitioner only.

There is no specific deadline on when the adjustment of status application needs to be submitted to USCIS but we recommend filing it soon after the marriage.

If the K-1 beneficiary is married to a U.S. citizen petitioner for less than 2 years at the time the green card is approved, the beneficiary will become a conditional permanent resident.

It means that the green card will be valid for 2 years only.

90 days before the expiration date of the conditional green card, Form I-751 must be filed.

Filing Form I-751 is called “Removal of Conditions on Residence”.

If the couple is married for more than two years at the time of adjustment of status interview, the beneficiary will receive unconditional permanent residency (10-year green card).

In this case, filing Form I-751 is not required.

Beneficiaries will become eligible for applying for U.S. citizenship 2 years and 9 months after becoming a permanent resident (conditional or unconditional).

If the couple marry within the 90-day period and filing for adjustment of status, the K-1 beneficiary may still become a permanent resident even if the couple divorces prior to adjustment.

If the marriage doesn’t take place within 90 days, but the K-1 beneficiary and K-1 petitioner still marry, adjustment of status is normally still permitted by USCIS.

K-1 visa holders cannot change status to another nonimmigrant category or adjust status to permanent residency on any grounds other than marriage to the K-1 petitioner.

K-2 children are eligible to adjust status as long as they enter the United States before age 21 and the parent marries the K-1 petitioner within 90 days.

As mentioned previously, if the K-2 child turns 21 prior to filing the adjustment of status, it’s not a problem. He or she will still be eligible for a green card in the U.S.

Form I-751 – How to Remove Conditions on Your Green Card